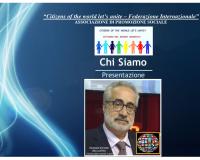 The association "Citizens of the world let's unite!" is an initiative that comes from below, with the free and equal participation of women and men from all over the world, moved by the desire to cooperate step by step for world improvement based on the universal values of equality, justice, freedom, fraternity and in solid collaboration with all the associations and movements committed to the good of humanity.

The association "Citizens of the world let's unite!" aims to be a driving force, at a territorial and planetary level, for the growth of a democratic, non-denominational and non-partisan, pluralistic, cultural, ecumenical movement, where all the inhabitants of the Earth feel and take action as Citizens of a single large family, promoting everywhere culture and practice of sharing as the only way to face the problems and evils of the world.

The association "Citizens of the world let's unite!" by its constitution aims to cooperate everywhere in the world for the preservation of cultural heritages of every single people or ethnic group. Cultural heritages to be transmitted in their best expressions through permanent education, for the mutual enrichment of all and for the gradual advancement of the living conditions of humanity.

These are the values on which the association "Citizens of the world unite!" bases its action:

● A spirit of sharing, collaboration, and global solidarity that privileges the person and the universe, open to the advancement and asseveration of new principles, concepts, and forms of local and world organization between citizens and peoples aimed at the common good.

diffusion of a new Humanism in the world that places at its foundation the universal declaration of human rights, the rights of the child, and every cultural expression aimed at the common good.

cultural and social exchanges and promoting sustainable social and environmental development, embracing the concept of Integral Ecology, both locally and on international and global scale.