Citizens of the world let’s unite" Movement for worldwide peace. 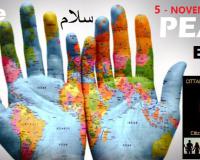 "Citizens of the world let’s unite" Movement for worldwide peace.

We women and men, inhabitants of this tiny planet called earth, are shocked spectators of a devastating war unleashed against the Ukrainian people by Putin with his followers for lust for power and possession.

And we are shocked spectators of numerous other wars worldwide, which also bring about vast destructions, unspeakable violence, unending deaths, and disrupting emigrations.

We women and men active in the "citizens of the world let’s unite" Movement do not intend to spend our days as helpless spectators and denouncers of all these wars with their atrocities, suffering, and deaths. Every day inside of us, the cry "WHAT TO DO?"  is stirred vigorously, a cry that pushes us to the construction and concretization of practical action for worldwide peace.

We know that international and local organizations and associations have been active in the world for a long time, promoting a vision and action for universal peace. An example is Pope John XXIII's encyclical "Pacem in Terris" of 1962, a document directly addressed to hundreds of millions of Christians worldwide to become promoters of peace. In 1978, the UN General Assembly, in article 1 of resolution 33/73 to press human communities to live in peace, declared: "Every nation and every human being, regardless of race, conscience, language or sex, has the inherent right to life in peace. Respect for that right, as well as for the other human rights, is in the common interest of all mankind and an indispensable condition of advancement of all nations, large and small, in all fields."

Nevertheless, the arms race, including the atomic ones, is constantly growing, and wars are unleashed everywhere in the world, despite all the announcements and initiatives for peace promoted for many years by institutions, associations, and uncounted people of goodwill.

This must lead us to reflect on how widespread and consolidated ideologies and selfishness are everywhere in the world that leads to possession, prevarication, exploitation of man over man, to plunder of all the goods at hand.

We of the "Citizens of the world unite" movement, however, believe that all the energy spent to date to promote peace has not been in vain. They have put a stop to greater devastation and have created greater awareness and participation of the masses on the path to peace.

A very long and tireless commitment is still required of all people of goodwill for true universal peace.

We "Citizens of the world unite" intend to commit ourselves to building an ever more incisive union and cooperation between peacemakers everywhere in the world. Collaboration has as one of its main objectives the promotion of a humanistic and critical culture for all women and men in the world, particularly for the less educated masses. Without cultural instruments based on ideals of fraternity and solidarity, women and men will never be able to implement their emancipation and build worldwide peace actively.